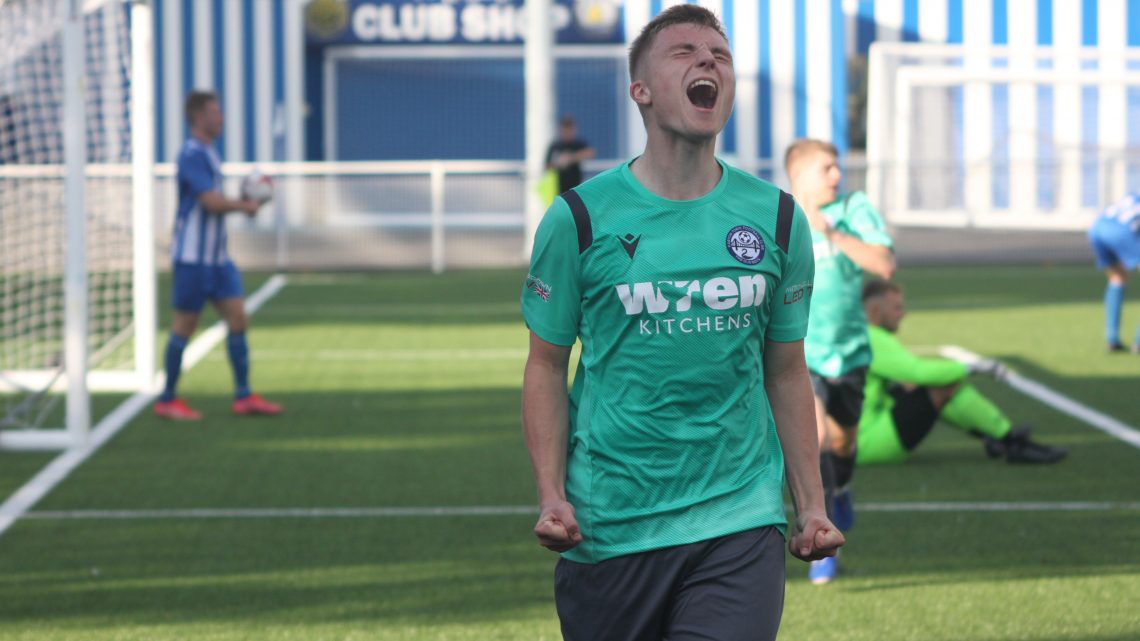 27th September 2021 Off By bartontown

Barton Town secured their place in the First Round Proper of the FA Vase with a win on penalties at Staveley Miners Welfare.

The game looked destined for a shootout until Harrison Coley scored with ten minutes remaining. With virtually the last kick of the game, Declan Howe scored for the hosts to take the game to a shootout. Mike Emery saved a penalty with the Swans scoring all five of theirs to take the win.

New signing Euan Sterling came in for the suspended Tom Davie with Mitchell Levi-Lewis replacing Curtis Bateson who was unavailable.

Both sides started well but the Swans were creating the better chances. Ben Hinchliffe had a couple of fine efforts. Some nice interplay with Coley teed up Hinchliffe, but his left footed curling shot was saved by the goalkeeper.

20 minutes in and Staveley almost took the lead. A corner was swung in and a fine header glanced just the wrong side of the post to keep the score goalless.

It was an end to end game throughout with neither side able to find the breakthrough in the first half. Sterling looked uneasy at first but grew into the game and put in some vital tackles in what was a good performance for the youngster.

In the second half the Swans were on top. Levi-Lewis had a couple of fine curling shots but the ‘keeper managed to get to them. He was replaced 15 minutes from the end by Kian Salter, who has recently been promoted to the first team full time.

When it looked like a goal wasn’t forthcoming, a moment of inspiration from Tom Waudby gave the Swans the breakthrough. He surged from the right hand side, riding a few tackles and having the presence of mind to play in Coley. His shot was low into the bottom right corner to give Barton the lead.

When the Swans looked to have won the game, Staveley won a free kick deep in added time. With virtually the last kick of the game Howe prodded the ball past the keeper after the free kick was swung in.

This sent the game to penalties. Ben Hinchliffe scored the first for Barton, but Emery was a hero, saving the first Staveley effort. Coley scored his second penalty, Staveley did too. Scott Matthews stepped up and lashed the ball into the top left corner ala Harry Maguire in the Euros. Staveley then scored with Swans boss Nathan Jarman scoring the fourth. With Staveley scoring again Waudby could win it for Barton. He stepped up and scored his penalty to secure a win for the Swans.