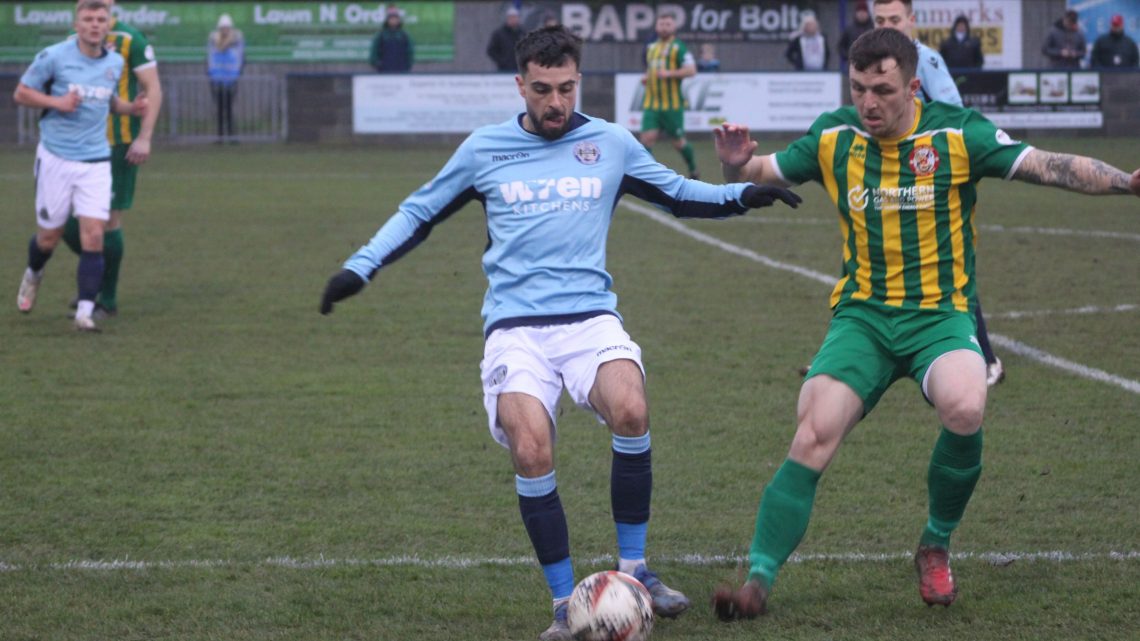 An incredible game of football was decided by a last minute goal as the Swans conceded late to lose 3-2 against North Shields at the Easy Buy Stadium.

David Robinson opened the scoring for the visitors before Ben Hinchliffe equalized with his 15th goal of the season. Andrew Cartwright restored Shields’ lead before a missed penalty for each side. Tom Waudby brought the Swans level in added time before Ryan Carr broke Swans hearts by scoring with virtually the last kick of the game.

North Shields started the better side and came on strong. Ten minutes into the game they had a goal-bound effort cleared off the line by Taron Hare. The game soon opened up and the Swans grew into it. Curtis Bateson was next to have an effort. He burst into the area and cut inside onto his left foot, but his shot went into the side netting.

The end to end nature of the game was epitomised when Ben Hinchliffe ran onto a loose ball and tried to lob the goalkeeper. His effort ended up on the roof of the net. The resulting goal kick was launched forward and David Robinson slotted the ball low past Mike Emery to give the visitors the lead.

Hinchliffe atoned for his miss however when he ran into the area and his shot was low and rolled into the bottom right corner for his 15th goal of the season.

The Swans finished the half on top with Bateson having an effort blocked before the follow up was saved by the goalkeeper as Barton looked for another goal.

The rain came down in the second half, making conditions more difficult. Tom Davie had an outstanding shot from distance tipped over by the North Shields goalkeeper. It was action at the other end next with Emery pulling off a brilliant save before Hare was on hand again to clear the ball off the line.

On the hour mark came Emery’s only error in a man of the match performance. An Andrew Cartwright free kick came into the area, and Emery attempted to punch it clear but the ball slid off his glove and into the back of the net.

On 73 minutes the Swans were awarded a penalty when Tom Waudby was brought down in the area. Hinchliffe stepped up but his penalty was saved by the keeper and cleared. Four minutes later Shields won a penalty of their own. The story was the same, Emery saved the penalty to keep it 2-1.

In stoppage time the Swans were throwing everything at Shields, and it came good when a Waudby header was high past the keeper and into the back of the net to give the Swans an equalizer.

Seconds later joy turned to despair as Ryan Carr ran onto a Hare header and his scuffed shot was past Emery and in. The Swans were defeated in an incredible game which had it all.