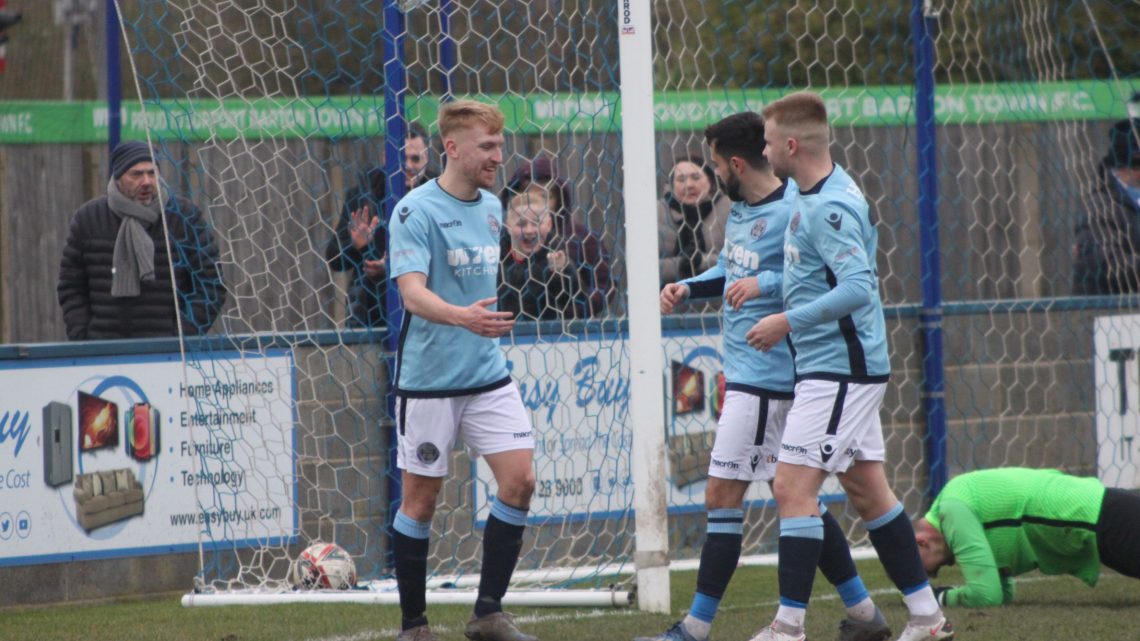 7th February 2022 Off By bartontown

A goal in the seventh minute of added time secured a point for Penistone as the Swans picked up a point at the Easy Buy Stadium.

Curtis Bateson gave the Swans the lead with a penalty in the first half. While Barton looked likely to hold out, a curling effort from Nathan Keightley deep into added time secured a point for the visitors.

There was one change from the draw at Garforth in midweek. Elliott Vasalo replaced Jack Tanser in the starting XI, with Tanser dropping to the bench.

Both sides exchanged half chances in the opening proceedings, Tom Waudby went closest for the Swans with a shot from distance which went just wide. Daniel Howes then glanced a header wide from a Penistone free kick.

The main event of the first half came seven minutes before the break. Ben Hinchliffe broke clear and was in on goal. Penistone ‘keeper Chris Snaith brought down the Swans striker as he tried to round him. Curtis Bateson stepped up and scored despite Snaith getting a strong hand to it for his ninth goal of the season.

Shortly after the break the Swans had a golden chance to go two up. Tom Waudby drilled a shot at goal which bounced up off the post. Hinchliffe couldn’t quite get his foot to it and it was cleared. Harrison Coley’s follow up show went just over the bar.

On the hour-mark the Swans had the ball in the net. A shot was parried by Snaith into the path of a grateful Hinchliffe, who tapped it in. However the goal was chalked off by the linesman in what was a dubious decision.

The latter stages of the second half saw Penistone come on strong, with the Swans having to do the majority of the defending. Barton were holding firm and defending well.

The referee signalled for four minutes of added time, with a Penistone player needing treatment in that time. Seven minutes on the clock and the ball fell to Nathan Keightley on the edge of the area. He curled his effort with assistance from the wind, into the top corner in a fine finish.

The Swans remain unbeaten but three points eluded them again.