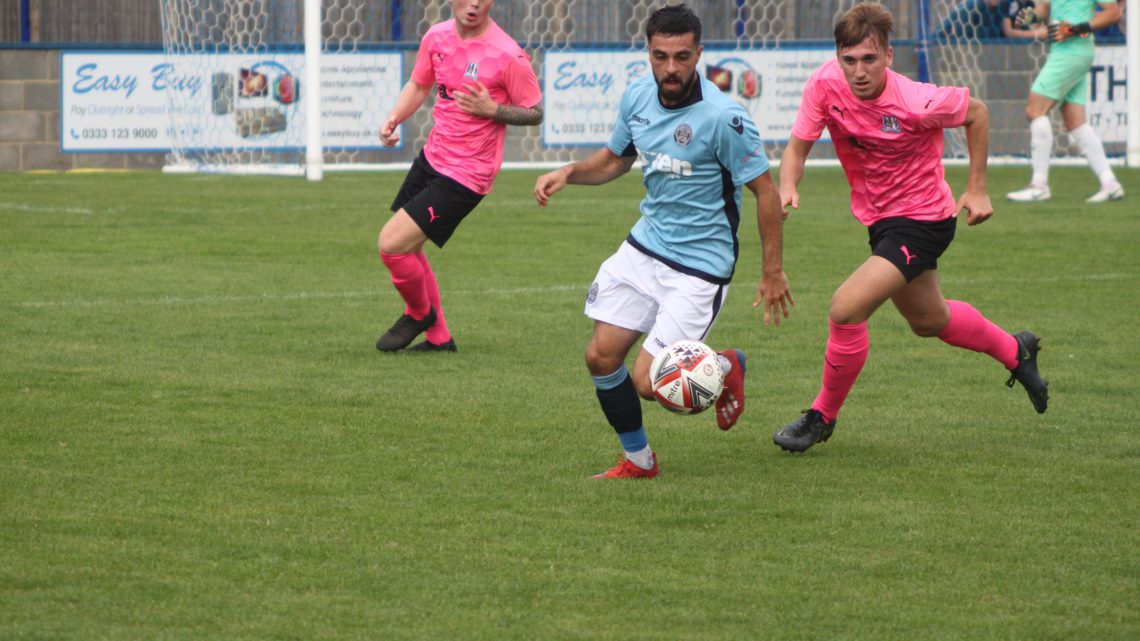 20th September 2021 Off By bartontown

A quickfire double condemned ten-man Barton Town to another home defeat, this time at the hands of Eccleshill United.

Tom Davie was shown a red card just after half an hour, Talent Ndlovu opened the scoring from the resulting free kick. Luke Hemingway scored shortly after the break to equalize but two goals in two minutes from Jonny Irving and Sumaili Cissa sealed the Swans’ fate.

New signings Tom Waudby and Jack Tanser started, with Scott Matthews returning to the side after missing the last game against Staveley. Reserves striker Kian Salter again started in place of Ben Hinchliffe, who wasn’t quite 100% fit.

The Swans began the brighter side, with Salter almost opening the scoring in the first five minutes. Waudby played a nice through ball which met Salter, but his touch eluded him, and the ball ran into the grateful hands of the goalkeeper.

Midway through the first half Eccleshill were starting to grow into the game, Barton’s explosive start starting to catch up with them. On 32 minutes Tom Davie was sent off as he brought down the Eccleshill attacker when he was the last man. Salter was brought off with Luke Hemingway coming on to fill the gap at centre half.

The resulting free kick was tipped onto the post by Mike Emery but Eccleshill captain Talent Ndlovu reacted quickest to tap the rebound in.

Shortly after the break Barton managed to equalize. Josh Lacey launched a long throw into the area, it was flicked on by captain Taron Hare, and Hemingway headed the ball past the keeper. It was a carbon copy of Hemingway’s other Barton goal in a pre-season friendly at Hall Road Rangers.

Shortly after the hour Eccleshill almost retook the lead as Jonny Irving was played in but he dragged his shot wide. Curtis Bateson was next to almost break the deadlock when he cut inside in the area and shot just over the bar. Emery then pulled off a fantastic save when a curling shot was destined for the top corner, but Emery caught it and the scores remained level.

On 73 minutes however Eccleshill finally broke the deadlock as a clearance from Emery was picked up in midfield and Eccleshill countered. It was squared to Irving who slotted past Emery.

Seconds after Barton kicked off Sumaili Cissa sprung the offside trap and was one on one with Emery. He slotted low under the legs of the Swans ‘keeper to seal the three points for the visiting side.