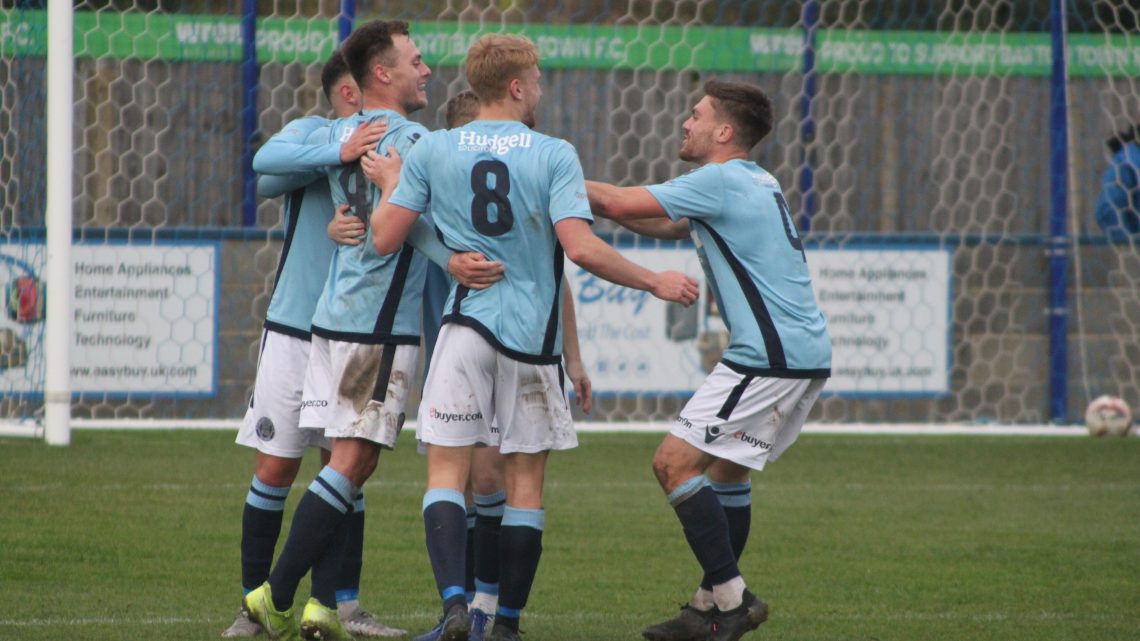 Barton Town romped to a 5-1 win at the Easy Buy Stadium over Emley AFC.

A Ben Hinchliffe brace along with goals for Jamie Goddard, Tom Waudby and Mitchell Levi-Lewis sealed the win for the Swans, with Matt Sykes scoring for the visitors.

Injuries to Taron Hare and Curtis Bateson saw Scott Matthews and Levi-Lewis come in, with hometown boy Josh Lacey taking the captain’s armband. Before the game there was an impeccably observed minutes silence for Les Taylor, father of Swans volunteer Owen.

The Swans almost took the lead instantly when a long ball forward was won by Waudby. He shot from the edge of the area but it was out for a corner.

After an end to end opening period, the Swans finally took the lead on 18 minutes. Some good work from Harrison Coley on the byline meant he won the ball and crossed it to Jamie Goddard who was waiting to head it in.

25 minutes in and Hinchliffe ran onto a perfectly timed through ball but when he tried to nudge it past the goalkeeper he caught the Swans striker, bringing him down and giving Barton a penalty. Hinchliffe stepped up and slotted it low into the bottom left corner to double Barton’s lead.

A further chance from Waudby was headed just wide before Emley were back in the game before half time. Matt Sykes ran up but his penalty was saved by Mike Emery. He parried it back into the path of Sykes and despite the defenders’ best efforts it bundled over the line to half the deficit.

The visitors started the half well, with a fantastic block by Lacey keeping the score at 2-1. The Swans rode the storm, with Emley piling on the pressure.

On the hour mark Emley substitute Joe Jagger was played in and unleashed a venomous shot from 25 yards out, but Emery pulled off a strong save to deny the visitors.

The Swans were rewarded for their defending by getting a third. 66 minutes in Scott Matthews managed to pick the pocket of the defender. He swung the ball into the area and Tom Waudby was on hand to head in his fifth goal in eight games.

Shortly after the Swans were awarded an innocuous free kick on the left side. Mitchell Levi-Lewis swung it in, and it beat everyone including the goalkeeper as it curled into the back of the net for his first goal for the club.

Grant Tait almost added a stunning fifth goal with a thunderous volley from the edge of the area, but it went just over. However there would be a fifth goal.

Ten minutes from the end Kian Salter played a fantastic lobbed through ball, with Hinchliffe springing the offside trap. He ran in and coolly slotted past the keeper for his second goal of the game.

The first time Barton had scored five in a game since March 2020 in a 5-0 win over Bottesford. A healthy crowd of 232 saw the Swans extend their unbeaten run.