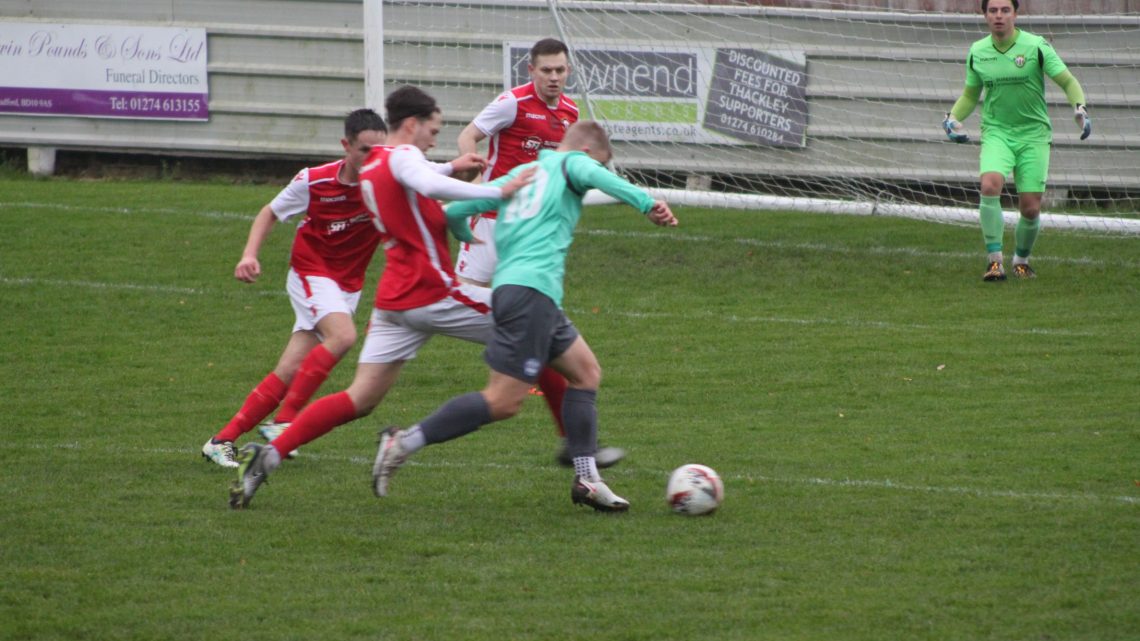 8th November 2021 Off By bartontown

Seven goals in the last 15 minutes of the game saw Barton Town win 6-4 at Thackley at Dennyfield.

Following a single goal in the first half through Harrison Coley, the second half saw nine goals scored.

There were two changes to the side that won 1-0 against Silsden in the NCEL League Cup. Scott Matthews and Josh Baker returned to the side in place of Tom Davie and Kian Salter.

It was the hosts who had the stronger start, putting pressure on the Swans defence and carving out the first chance ten minutes in. A free kick from range went just over the bar and didn’t trouble Mike Emery.

The Swans first chance came midway through the first half when Jamie Goddard’s shot was just over from the edge of the area. The Thackley goakeeper then clawed a Taron Hare header from a corner just over the bar as the Swans grew into the game, and soon had their reward.

A through ball from midfield fed Harrison Coley, who shot right footed from just inside the area with the ball nestling into the bottom right corner.

So began a frantic 45 minutes for both sides. 53 minutes in Grant Tait was adjudged to have committed a foul on the left side. The free kick was lobbed into the area and headed in by Ben Grech-Brooksbank to level the scores.

The Swans weren’t level for long however as midway through the second half Coley scored his second with a neat ball along the area meeting him at the back post.

15 minutes left in the game and the Swans found their clinical edge. Coley completed his hat-trick after some brilliant work from Tom Waudby on the wing. His ball found Ben Hinchliffe who teed up Coley to score his and Barton’s third.

Two minutes later and it was four. Hinchiffe was played in on goal and coolly slotted past the keeper to score his tenth of the season and seemingly put Barton out of sight.

A couple of minutes later Thackley scored again through Albert Ibrahimi. Seconds after the restart the Swans scored again as Waudby crossed the ball in and Kian Salter, on as a substitute, headed it in for his first ever goal for the senior side.

A few minutes later it was six, Salter played a low ball across the area which met Waudby at the back post as he scored his ninth of the season.

Two goals for Thackley in added time for Lewis Waddington and Ibrahimi rounded off the scoring in one of the craziest finishes to a Barton Town game in a long time.

The win sees the Swans unbeaten in 12, keep up their unbeaten away record this season, and boost their points tally to take them above Thackley, and 8th in the league.