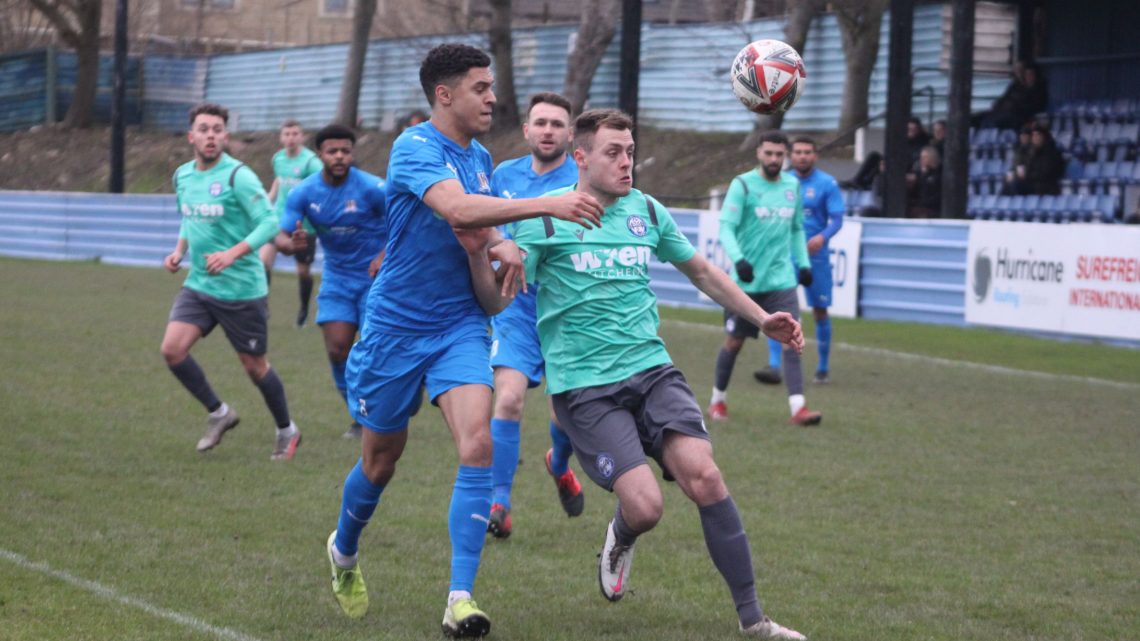 Barton Town battled for a point at high-flying Eccleshill United with the Swans having to defend for 40 minutes with ten men. This followed Josh Lacey’s red card early in the second half.

Curtis Bateson had given the Swans the lead in the first half and Barton were good value for it. Following the red card the Swans defended wave after wave of Eccleshill attacks before Ellis Wade finally broke through for the hosts five minutes from the end.

There were three changes to the Swans lineup, Taron Hare returned to make his 50th appearance for the club. Jack Tanser and Mitchell Levi-Lewis were also drafted in. They replaced the departed Grant Tait, Harrison Coley and Elliott Vasalo (both ill).

The opening proceedings saw Ben Hinchliffe go close when he managed to beat the goalkeeper to the ball, but he couldn’t quite get his effort on target.

Midway through the first half Tom Waudby forced Eccleshill goalkeeper Edward Wilczynski into a fantastic save. Mitchell Levi-Lewis swung a cross in from the left. Waudby headed it from six yards out with Wilczynski tipping it over at point blank range.

However ten minutes before the break the deadlock was broken. Will Waudby’s fantastic work on the left to hold off the defender and then played a sumptuous through ball to Bateson. The winger cut inside into the area and his deflected shot beat Wilczynski and was in the back of the net.

The Swans had an incredible effort just after half time. Hinchliffe was played in but his effort was saved. This miss was pivotal as five minutes later the Swans were a man down.

Eccleshill were through on goal, and Josh Lacey brought him down as the last man. The referee handed Lacey the first red card of his career and Barton had to defend for 40 minutes with ten men.

From the resulting free kick Eccleshill scored. The linesman had his flag up but then put it down again. Amidst the confusion the referee went over and consulted. The goal was ruled out for offside.

The rest of the game was an onslaught for Eccleshill, attack after attack. The Swans were resilient, defending like their lives depended on it. Barton sat deep, with Hinchliffe pulling off a nice goal saving block.

Five minutes from the end and the pressure finally paid off for the hosts. Ellis Wade had the ball in the back of the net but the Swans’ valiant defending meant Barton came away with a point and extended their unbeaten league run to 15 as well as remaining unbeaten away from home all season.