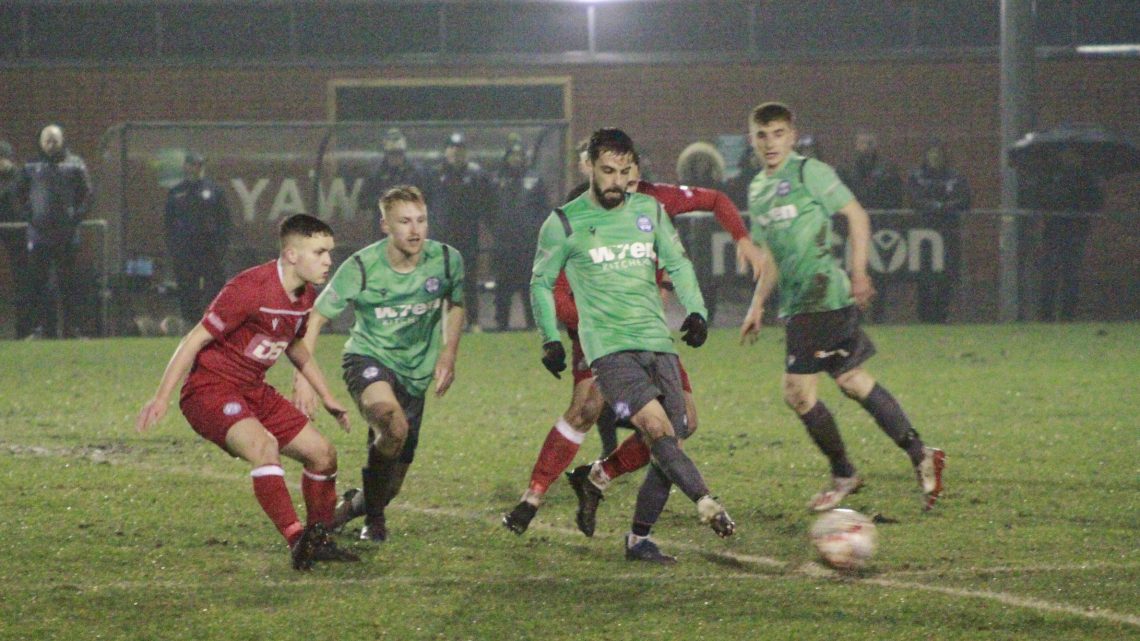 A battling Barton Town lost out to table-topping Grimsby Borough in a good performance with a scoreline that flattered the hosts.

A Lewis Collins penalty after just eight minutes gave the hosts the lead before debutant Kieran Wressell doubled the lead shortly after half time. A last minute Collins goal secured the win.

Swans Manager Nathan Jarman named an unchanged starting lineup from the win against Emley at the weekend. He also named the same bench.

The first chance fell to the hosts as a cross was whipped in but headed wide by Tom Hipwell. However a few minutes later they were given a golden chance to score when the Swans conceded a penalty.

Lewis Collins stepped up and slotted it to the left, beating Mike Emery.

This didn’t deter the Swans however, as on the 15 minute mark Josh Baker teed up Curtis Bateson. But the winger’s shot went high over the bar from close range.

Grimsby were dangerous on the counter, and almost doubled their lead when another cross was fizzed in but no one could make contact with it and the chance went begging.

Barton were determined to score, and a Scott Matthews corner was met by the head of Tom Waudby, but his header went just wide.

In the closest the Swans got to getting on the scoresheet, Matthews looked to swing in a diagonal cross, but the wind took it and it almost caught out Liam Higton. The goalkeeper tipped it over for a corner.

The last chance of the half fell to the Swans as Ben Hinchliffe controlled a high ball well, and set up Bateson. His curling shot went just wide of the goal.

Shortly after the break the hosts doubled their lead. A free kick was sent into the area and headed on by Kieran Wressell. The centre half was making his debut for Grimsby and marked it with a fine goal.

On 65 minutes Grimsby were awarded a free kick, with the referee showing a red card to Curtis Bateson. Not for the foul, he wasn’t to blame, but was sent off for dissent.

The Swans kept fighting however, with Hinchliffe teeing up Tom Waudby on the edge of the area. His first time shot was deflected out for a corner as the Swans just couldn’t find the net.

In stoppage time the Swans believed the ball went out of play so stopped. The ball was swung in with Emery thinking it had gone out for a goal kick. Therefore he wasn’t paying attention when Collins flicked up the ball and volleyed it into the back of the net with a brilliant finish. The Swans appealed that the ball went out but the referee awarded the goal.

Another defeat on the road for the Swans but the scoreline doesn’t reflect how hard Barton worked, and how unlucky they were to be on the end of a 3-0 scoreline.

Wildcats to be guests at Swans Reserves game