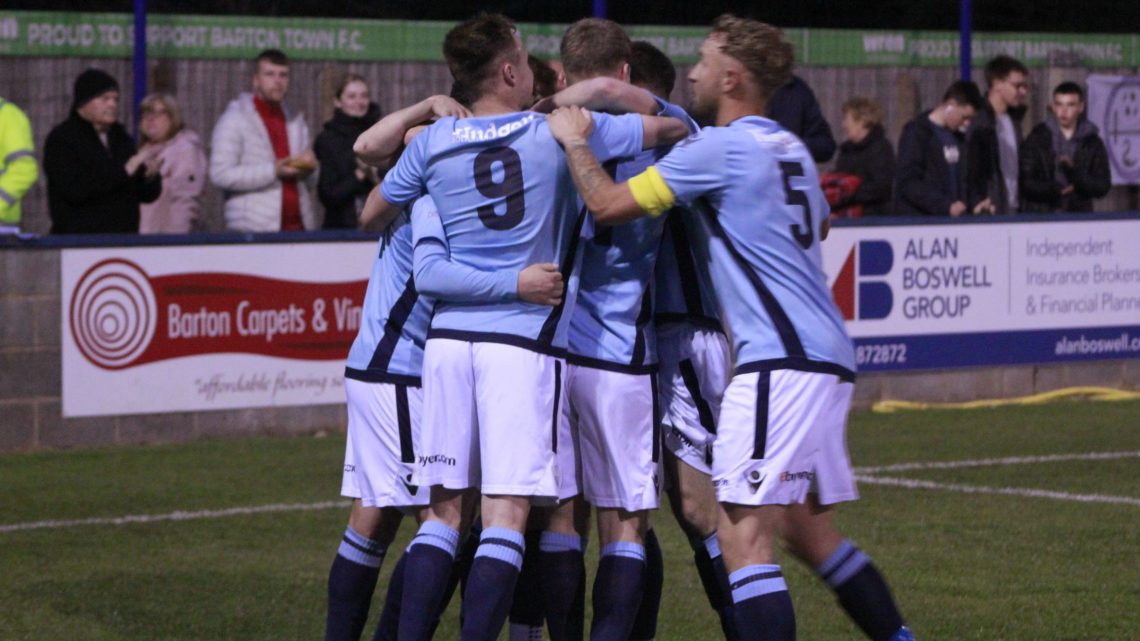 Barton Town’s season is to end with an historic debut appearance in the NCEL League Cup final following a narrow 1-0 win over Staveley Miners Welfare at the Easy Buy Stadium.

Mitchell Levi-Lewis’ penalty on the stroke of half time was enough to separate the two sides in a professional display from the Swans including a clean sheet.

The first chance fell to the Swans as Tom Waudby flicked on a long ball into the path of Ben Hinchliffe. He ran in on goal but his left footed effort went just wide of the goal.

Staveley then went close as Ewan Catt was played in one on one with Charlie Dixon. The Swans ‘keeper pulled off a brilliant save with his knees to keep out the Trojans.

Midway through the first half the Swans had a free kick on the edge of the area after Hinchliffe was fouled. Scott Matthews drilled in the free kick and it was parried by Luke Chadwick in the Staveley goal. The rebound fell to Will Waudby who couldn’t quite get the shot away before Chadwick recovered the ball.

On the stroke of half time Tom Davie was brought down in the area and the referee pointed to the spot. Mitchell Levi-Lewis was the one to break the Swans penalty hoodoo as he slotted it into the bottom right corner to put Barton ahead at the break.

Josh Lacey almost scored from a corner five minutes into the half when it missed everyone and landed at the defender’s feet at the back post. His shot went just over from close range.

It was a nervy half for the Swans as they were defending well, but couldn’t get the final touch right to add more goals. Staveley were growing into the half and putting pressure on the Swans, which they dealt with. Marley Grant came off the bench for the visitors and caused problems for the Barton defence.

A nervy end was rewarded with another 1-0 win in the League Cup, our third in the competition to tee up the final at Doncaster Rovers’ stadium against Garforth Town or Grimsby Borough.