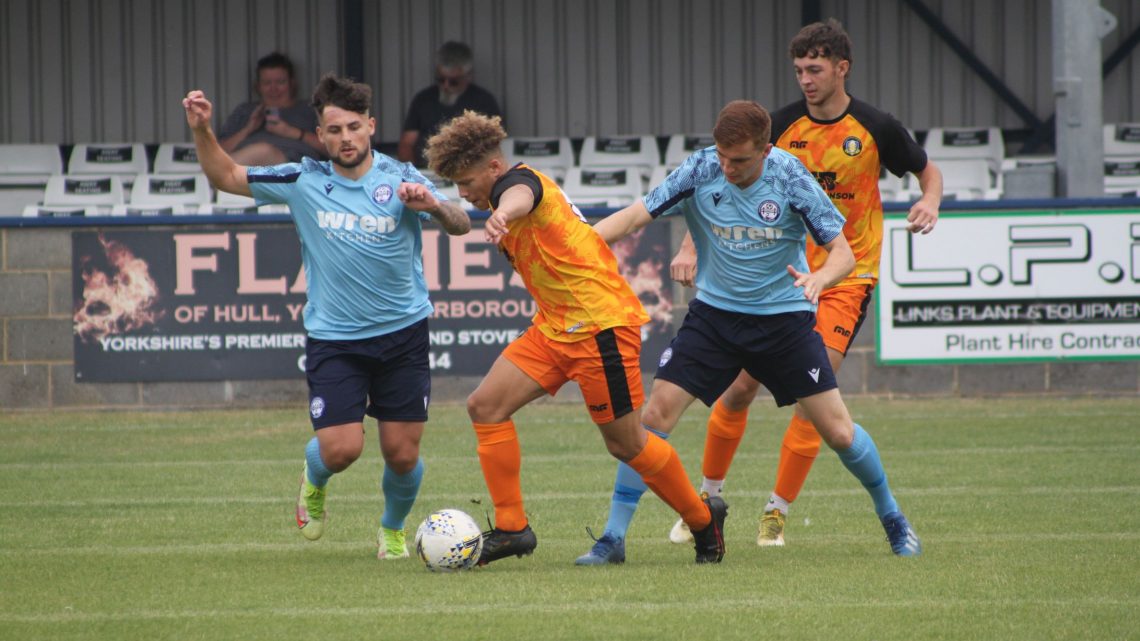 The Swans went in 4-0 down at the break, after a mix of well taken goals and defensive lapses. A stronger second half saw Chris Spinks, Nathan Jarman and Tom Waudby get on the scoresheet to reduce the arrears.

A lapse in concentration opened the scoring, with Gainsborough’s number eight latching on and slotting past Tom Nicholson. 25 minutes in and it was two. The number 11 taking a touch inside the area and striking a curling effort which was just beyond Nicholson and into the top right corner.

The Swans were fighting back, Chris Spinks hit a sweet volley from distance which only just cleared the crossbar. However seconds later Gainsborough went up the other end and scored through Darius Smith.

Shortly before the break the Trinity left back lobbed the ball back to the goalkeeper but overhit it. Almost scoring a spectacular own goal if not for the back peddling keeper heading it clear for a corner.

Just before the break and it was four, Smith again scoring for the Holy Blues with a nice finish.

The second half began with some fight from the Swans, keen to put on a better performance. 53 minutes in Gainsborough sprung the offside trap and were in on goal. The ball was squared to their number 17 who tapped into an empty net. Five minutes later he scored again with a header at the back post looping over Nicholson.

The final half hour was all Barton. Tom Waudby rifled his shot at the keeper after captializing on a defensive mistake, before Spinks had an effort from the edge of the area which went over.

Tom Waudby again with a chance as he curled his effort over before Spinks finally got Barton on the scoresheet after 72 minutes with a low powerful strike.

82 minutes in and Harrison Coley was played in, he took some neat touches but his shot was saved by the young goalkeeper who pulled off some fantastic saves. Swans boss Nathan Jarman came on to face his former side, and got involved with the scoring.

Jarman scored 28 goals in 101 games for Gainsborough, but was scoring against them in this friendly. He dribbled past the defender and struck low, beating the keeper and adding a second to Barton’s tally.

A Tom Waudby header from a corner sailed into the back of the net to add a third just before the full time whistle in a friendly full of endeavour.