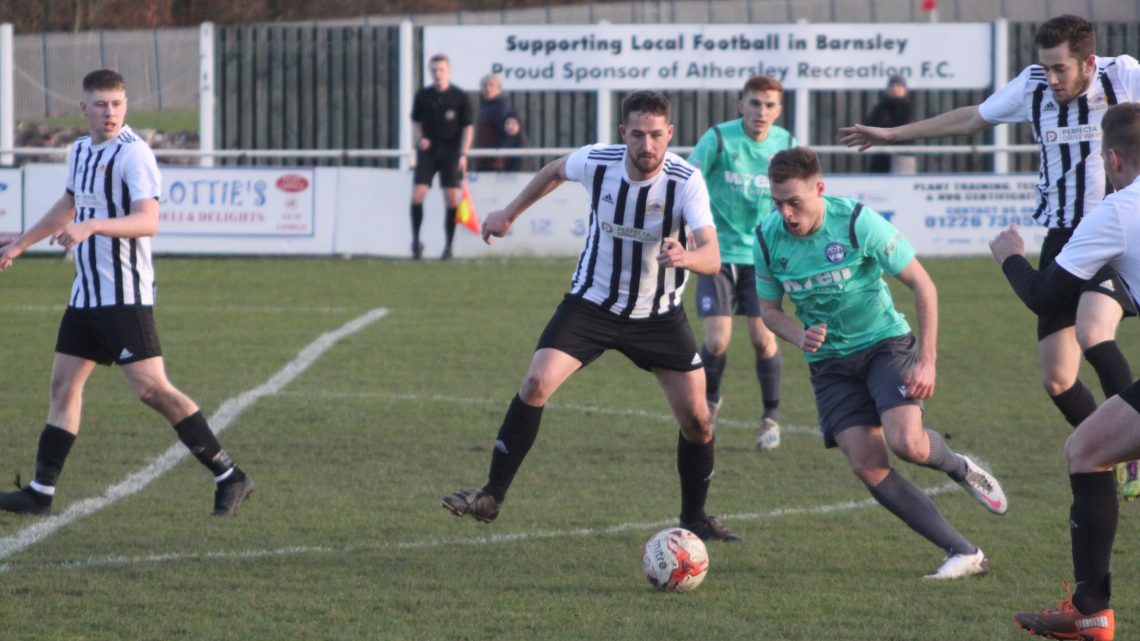 Barton Town remain unbeaten away from home this season with a 4-1 win over Athersley Recreation at Sheerien Park.

Tom Davie gave the Swans the lead on ten minutes before Harrison Coley doubled the lead on the half-hour mark. Mitchell Levi-Lewis scored a third before half time to effectively seal the win. Ben Hinchliffe added a fourth on 75 minutes before Jack Briscoe scored a late consolation for the hosts.

With Josh Lacey suspended, Davie slotted in at centre-half with Levi-Lewis filling in at full back. Will Waudby made his 100th appearance for the club.

The blustery conditions made it difficult for the players but the Swans took it in their stride and were soon ahead. A Taron Hare long throw was met by the head of Davie, whose looping header beat the goalkeeper to put Barton ahead.

Barton were comfortable, playing good football and defending resolutely. On the half-hour mark the Swans were awarded a free kick in a good area. Davie’s strike hit the wall and rebounded out to Coley. He took it past the defender and struck from the edge of the area. The low ball beat the keeper and into the bottom corner for his seventh of the season.

Soon after Hinchliffe played in Tom Waudby, but both the attacker’s shots were blocked by the Athersley defence.

It was three just before the break as Curtis Bateson was hacked down on the edge of the area. Levi-Lewis stepped up this time and curled his free kick into the bottom corner to seal the points for the Swans.

The hour mark saw the Swans forced into a change as Davie came off injured with a calf problem. He was replaced by Jack Tanser.

The second half saw the Swans press for a fourth but with the points won Barton lowered the intensity. A fourth goal did come however.

Some fine work by Tom Waudby on the right saw him send a low cross into the area. It was met by Hinchliffe who prodded it past the keeper for his 18th goal of the season.

In added time, Mike Emery tried to bring the ball out and under control. However he was caught out by Jack Briscoe who robbed the keeper and struck into an empty net from distance.

The Swans won and extended the unbeaten league run to 16 with a trip to Garforth Town next for Barton Town.