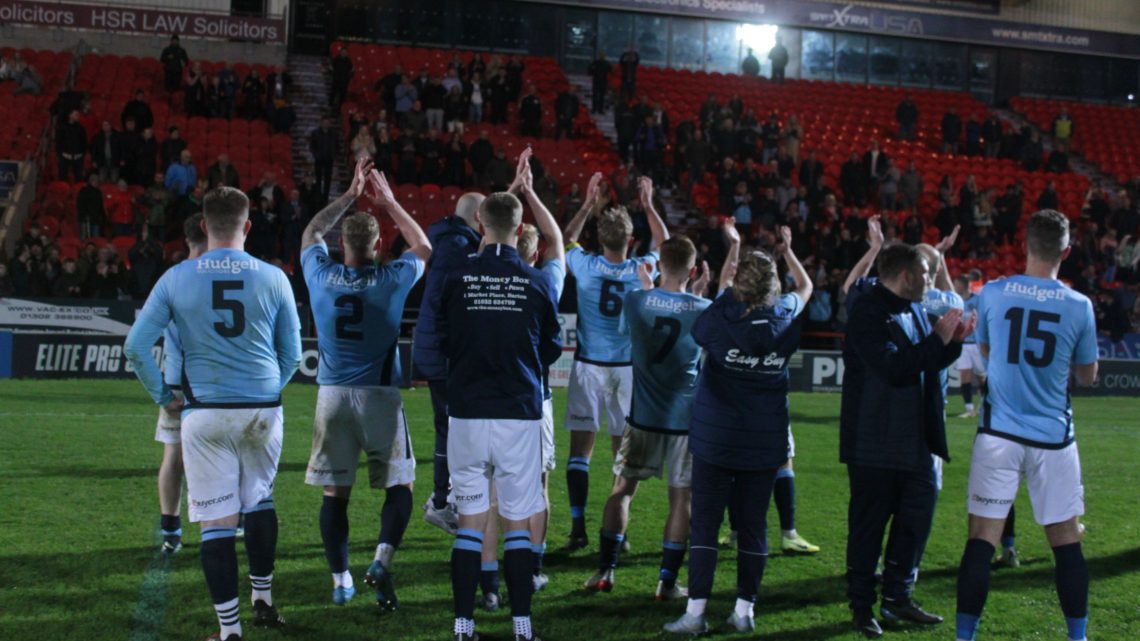 Ben Hinchliffe opened the scoring with his 25th goal of the season before Will Waudby doubled the lead. The second half saw Garforth fight back, and they scored twice in three minutes through Karl Fitzgerald and Hass Gorji to take the game to extra time. Tom Waudby struck with ten minutes left to secure the Swans the trophy.

Just three minutes into the game the Swans won a throw. Taron Hare launched it into the area. It was flicked on by Tom Waudby and Ben Hinchliffe struck into the bottom corner to score his 25th of the season.

Garforth had a couple of good chances to equalise. A corner was well tipped over by Charlie Dixon before a James Burgess header went just over the bar.

The lead was then doubled when another Hare long throw was flicked on by Tom Waudby to brother Will. He shot left footed into the bottom right corner to double Barton’s lead.

Dixon denied Burgess again at the near post when his speculative shot nearly caught out the Swans keeper. Will Waudby then made an excellent run down the left, he crossed to Hinchliffe whose flick went agonisingly wide of the goal.

There was one more chance apiece before the break. Tom Waudby was played in one on one with the keeper but Toby Wells pulled off an excellent save. Garforth then had a free kick on the left in added time. It was swung over and a Dixon save then a brilliant Hare block denied Garforth.

The second half saw Garforth really take the fight to the Swans. Just after the hour mark Burgess was played in and Dixon again pulled off a cracking save to deny the striker. He then pulled off another save on 70 minutes.

Just after Will Waudby made another excellent burst down the left, he squared it to Jamie Goddard but the midfielder’s first time shot went over the bar.

On 84 minutes Garforth’s persistence finally paid off when Karl Fitzgerald was played in and he slotted low past Dixon to half the deficit.

Just three minutes later they were level when Hass Gorji was in on the right. His shot went just below Dixon and into the bottom left corner to send the game to extra time.

94 minutes in and Tom Waudby headed just over the bar with an excellent chance to take the lead. He had another effort though.

111 minutes and tired legs were showing. But Hinchliffe was played in and struck. Wells saved it but the rebound fell generously to Tom Waudby who tapped in the rebound to win the game for Barton.

There were awesome scenes at full time as the Swans went over to the excellent travelling support to thank them before Taron Hare lifted the trophy. The first Barton have won in some time. It was a proud night for the club and one not many will forget in a hurry.